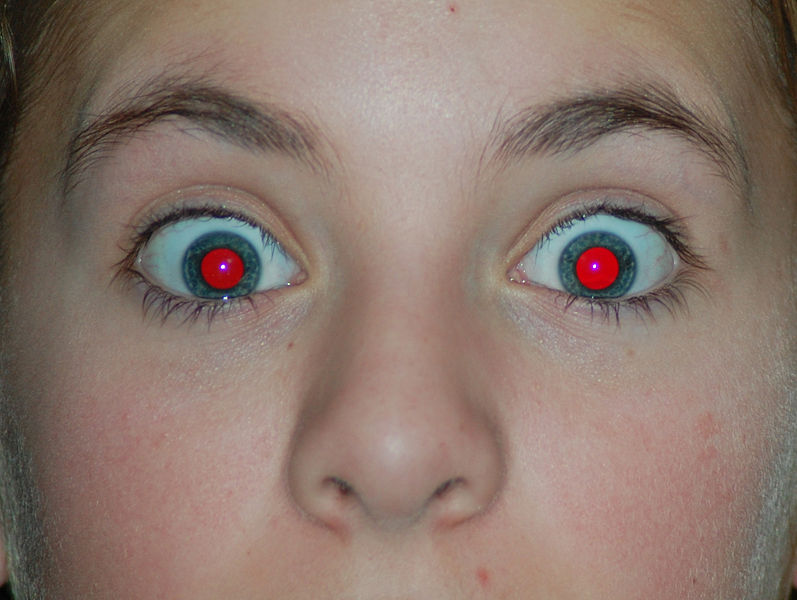 It’s happened to everyone – you have a great picture planned, it’s the perfect moment, and you line up the shot – only to discover later that your subject has suddenly turned into a vampire with glowing red eyes. It’s frustrating, and it ruins great photos. But why does it happen?

The vampire analogy, it turns out, isn’t that far wrong.

The human eye (and for that matter the eyes of other animals – cat and dogs get the red-eye effect too!) is essentially a clear lens that light passes through to be absorbed by the retina and turned into images. The retina is part of the fundus, the layer at the back of the eye, which is nourished by – you guessed it – blood vessels. Normally, when the eye is exposed to bright light the pupil contracts, so not very much of the light hits the fundus, but flash photography happens too fast for your eye to react, so most of the light gets through and lights up the pool of blood at the back of your eye.

So not only can red-eye ruin your photos, it’s also a little gross if you think about it too much.

Not everyone will get red-eye. The more melanin (skin pigment) there is in your eyeball, the more of the light will be absorbed before it hits the fundus and on the way back out, and the less red light will be reflected. People with darker skin or brown eyes are therefore much less susceptible than people with light skin and blue eyes, and people with two differently colored eyes might get it in one eye only.

So how do you fix this?

Luckily, since we know what’s happening, it’s pretty easy to avoid. The dimmer the ambient light, the more dilated your subject’s pupils will be – so even when using flash, try to take photos in a well-lit space. Also, standing a little further back, or having your subject not look directly at the camera, can prevent red-eye. Finally, red-eye can only happen if the flash bulb is very close to the camera lens, so higher-quality cameras will often be immune to the effect entirely.

If your photo still has red-eye, no problem! Any good photo editing software will have tools to remove and recolor the effect. PaintShop Pro has a simple red-eye tool that will fix the problem in one click but also has advanced red-eye removal tools that give you greater control and allow you to make adjustments to hue, pupil size, glint and much more. Watch our video tutorial to see these tools in action, and if you’re not a PaintShop Pro user you can download a 30-day free trial and give it a try yourself!

In HDR photography, there is a fine line between reality and fantasy — and, it’s absolutely breathtaking!
HDR (High Dynamic…

How to Edit Layers: An Introduction

What is HDR on iPhone Camera?

What is HDR on the iPhone 5 Camera?
Tapping this button on your iPhone 5 will toggle HDR mode on…

Why is iPhone Photography so popular? In some ways, it’s an easy question to answer. Photographers have a saying:…

Ready or not, Valentine’s Day is just around the corner! The kiddies are all set with their class lists…

Get a Faster Photo Workflow in AfterShot Pro
For a lot of people who take pictures time is money. In my…

Don’t put your friends to sleep with your travel pictures!
Now don’t stress. Whether it’s touring in the silence of…

PaintShop Pro Named Best Photo Editing Software
Now that we have our blog, it’s high time we tell you about…